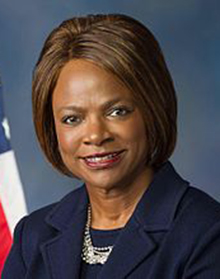 Valdez Venita "Val" Demings (March 12, 1957) is an American law enforcement officer and politician who serves as the member of the United States House of Representatives from Florida's 10th congressional district. She served as Chief of the Orlando Police Department, the first woman to hold the position. She was the Democratic nominee in both 2012 and 2016 to represent Florida's 10th congressional district in the United States House of Representatives, the latter of which Demings won.