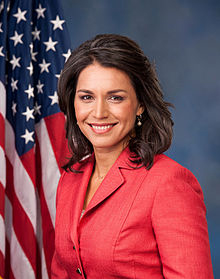 Tulsi Gabbard (born April 12, 1981) is an American politician of the Democratic Party serving as the U.S. Representative for Hawaii's 2nd congressional district since 2013. She was also a Vice Chair of the Democratic National Committee until February 28, 2016, when she resigned to endorse Senator Bernie Sanders for the 2016 Democratic presidential nomination. Elected in 2012, she is the first Samoan American and the first Hindu member of the United States Congress.