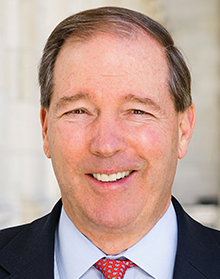 Thomas Stewart Udall ( born May 18, 1948) is an American politician serving as the senior United States Senator from New Mexico, a seat he was first elected to in 2008. A member of the Democratic Party, he previously served as the U.S. Representative for New Mexico's 3rd congressional district from 1999 to 2009 and was the Attorney General of New Mexico from 1991 to 1999. A member of the Udall family, he is the son of Stewart Udall, the nephew of Mo Udall, and the cousin of Mark Udall. He is the current dean of New Mexico's congressional delegation.

Tweets by https://twitter.com/SenatorTomUdall
Subscribe
Please login to comment
0 Comments
Inline Feedbacks
View all comments
wpDiscuz
0
0
Would love your thoughts, please comment.x
()
x
| Reply
You are going to send email to