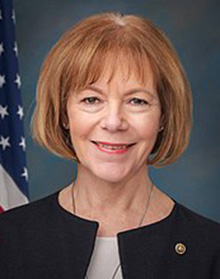 Christine "Tina" Flint Smith (born March 4, 1958) is an American politician and former businesswoman serving as the junior United States Senator from Minnesota since 2018, filling the seat vacated by Al Franken. She is a member of the Minnesota Democratic–Farmer–Labor Party (DFL), an affiliate of the Democratic Party. Smith served as the 48th Lieutenant Governor of Minnesota from 2015 to 2018, when she was appointed to serve as a U.S. Senator for the state.

Tweets by https://twitter.com/sentinasmith
Subscribe
Please login to comment
0 Comments
Inline Feedbacks
View all comments
wpDiscuz
0
0
Would love your thoughts, please comment.x
()
x
| Reply
You are going to send email to