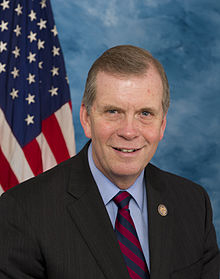 Walberg was born and educated in Chicago, Illinois, the son of Alice Ann and John A. Walberg. His paternal grandparents were Swedish. He left a post-high school position with the U.S. Forest Service to pursue higher education. At one point working in a steel mill to help pay tuition, he studied forestry at Western Illinois University and attended Moody Bible Institute, and completed his degree in 1975, when he earned a B.A. in religious education from Taylor University. By then Walberg was half-way through a four-year stint as a pastor at Grace Fellowship Church in New Haven, Indiana, which concluded when he enrolled in the Wheaton College graduate school. After receiving an M.A. in communications in 1978, Walberg and his young family relocated to Tipton, Michigan, where he led services at Union Gospel Church. He resigned his pastorship in 1982 in preparation for a successful bid for the Michigan House of Representatives.

Tweets by https://twitter.com/timwalberg
Subscribe
Please login to comment
0 Comments
Inline Feedbacks
View all comments
wpDiscuz
0
0
Would love your thoughts, please comment.x
()
x
| Reply
You are going to send email to