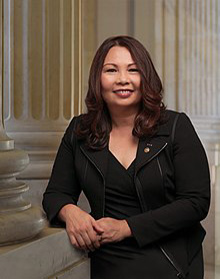 Ladda Tammy Duckworth (born March 12, 1968) is an American politician and retired U.S. Army lieutenant colonel, serving as the junior United States Senator for Illinois since 2017. A member of the Democratic Party, she earlier represented Illinois's 8th district for two terms (2013–2017) in the United States House of Representatives. Before election to office, she served as Assistant Secretary for Public and Intergovernmental Affairs in the United States Department of Veterans Affairs (2009–2011), and she was the Director of the Illinois Department of Veterans Affairs (2006–2009). In the 2016 election, Duckworth defeated incumbent Republican Senator Mark Kirk for the seat in the United States Senate.