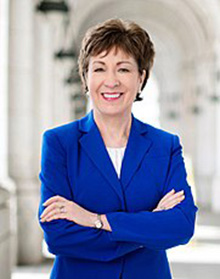 Susan Margaret Collins (born December 7, 1952) is an American politician serving as the senior United States Senator for Maine, first elected in 1996. A Republican, Collins is the Chair of the Senate Special Committee on Aging and is a former Chair of the Senate Committee on Homeland Security and Governmental Affairs. She also is known for her long consecutive voting streak, which reached 6,000 votes in September 2015. She is the most Senior Republican woman in the Senate and dean of Maine's congressional delegation. Collins has been described as the Senate's most moderate Republican. She often positions herself as a pivotal vote, thus becoming a focal point during highly watched legislation.