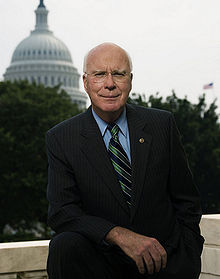 Patrick Joseph Leahy (born March 31, 1940) is an American politician serving as the senior United States Senator from Vermont, a seat he was first elected to in 1974. A member of the Democratic Party, Leahy held the position of President pro tempore of the United States Senate from December 17, 2012, to January 6, 2015, and was thus during that time third in the presidential line of succession. Now in his eighth six-year term of office, he is currently (since the December 2012 death of Daniel Inouye) the most senior member of the Senate, and is also the last of the Senate's "Watergate Babies" – Democrats first elected to Congress in 1974, following President Richard Nixon's August 9, 1974 resignation over the Watergate scandal. Additionally, Leahy remains one of the only two sitting U.S. Senators, the other being Orrin Hatch of Utah, to have served during the presidency of Gerald Ford. Leahy received the title of President pro tempore emeritus in January 2015.