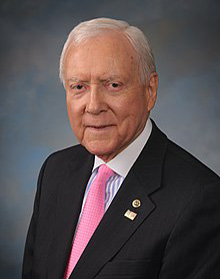 Orrin Grant Hatch (born March 22, 1934) is an American attorney and politician serving as the senior United States Senator for Utah who has been the President pro tempore of the United States Senate since 2015. Having been a senator since 1977, Hatch is the longest-serving Republican Senator in U.S. history. Along with Patrick Leahy of Vermont, he is one of only two sitting U.S. Senators to have served during the presidency of Gerald Ford. He is also one of two remaining Republican members of the Senate, along with Chuck Grassley of Iowa, to have served during the presidency of Jimmy Carter.

Tweets by https://twitter.com/orrinhatch
Subscribe
Please login to comment
0 Comments
Inline Feedbacks
View all comments
wpDiscuz
0
0
Would love your thoughts, please comment.x
()
x
| Reply
You are going to send email to