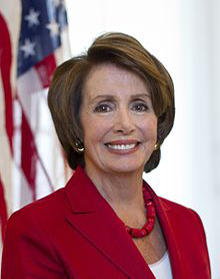 Nancy Patricia D'Alesandro Pelosi (/pəˈloʊsi/; born March 26, 1940) is an American politician serving as the Minority Leader of the United States House of Representatives since 2011, representing most of San Francisco, California. She previously served as the 52nd House Speaker from 2007 to 2011, the only woman to do so thus attaining the highest political office of any female politician in American history.

You got that right!

Frank the tank
Reply to  BigRed85

0
wpDiscuz
4
0
Would love your thoughts, please comment.x
()
x
| Reply
You are going to send email to