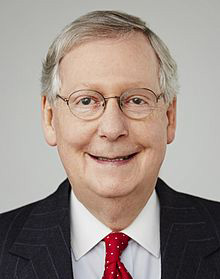 Addison Mitchell McConnell Jr. (born February 20, 1942) is an American politician serving as the senior United States Senator from Kentucky, a seat he was first elected to in 1984. A member of the Republican Party, he has additionally served as the Senate Majority Leader since January 3, 2015. He previously served as Minority Leader from 2007 to 2015. He is the second Kentuckian to lead his party in the Senate. McConnell is the longest-serving U.S. Senator in Kentucky history.

The turtle’s job is about to get a lot harder, and I love it.

Harder? How many Senate seats turned red? As always, Mitch McConnell will be leading the common sense side of the Senate, and the minority Dems can’t do anything about it. America has spoken!

0
wpDiscuz
2
0
Would love your thoughts, please comment.x
()
x
| Reply
You are going to send email to