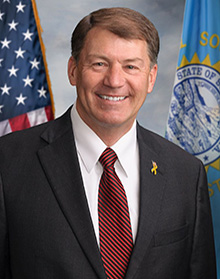 Marion Michael Rounds (born October 24, 1954) is an American businessman and politician serving as the junior United States Senator from South Dakota since 2015. A member of the Republican Party, he served as the 31st Governor of South Dakota from 2003 to 2011, having previously served in the South Dakota Senate from 1991 to 2001.