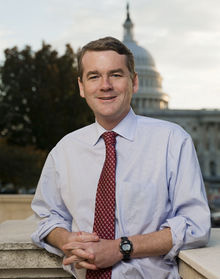 Michael Farrand Bennet (born November 28, 1964) is an American businessman, lawyer and politician serving as the senior United States Senator from Colorado, a seat he has held since 2009. A member of the Democratic Party, he was appointed to the seat when Ken Salazar resigned to become Secretary of the Interior. Bennet previously worked as managing director for the Anschutz Investment Company, chief of staff to then-Denver Mayor (and current Colorado Governor) John Hickenlooper, and superintendent of Denver Public Schools.

Tweets by https://twitter.com/SenatorBennet
Subscribe
Please login to comment
0 Comments
Inline Feedbacks
View all comments
wpDiscuz
0
0
Would love your thoughts, please comment.x
()
x
| Reply
You are going to send email to