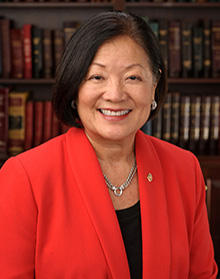 Mazie Keiko Hirono (Japanese name: 広野 慶子, Hirono Keiko; born November 3, 1947) is an American politician serving as the junior United States Senator from Hawaii since 2013. Hirono, a member of the Democratic Party, previously served as a member of the Hawaii House of Representatives from 1985 to 1995 and as the Lieutenant Governor of Hawaii from 1994 to 2002 under Governor Ben Cayetano. She was the Democratic nominee for Governor of Hawaii in 2002 but was defeated by Republican Linda Lingle. She was a member of the United States House of Representatives for Hawaii's 2nd congressional district from 2007 to 2013.