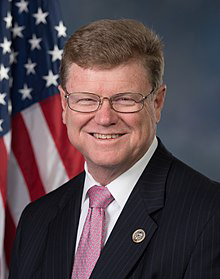 Mark Eugene Amodei (born June 12, 1958) is an American politician who has been the United States Representative for Nevada's second congressional district since 2011. Amodei, a Republican, previously served in the Nevada Assembly from 1997 to 1999 and in the Nevada Senate, representing the Capital District, from 1999 to 2010. After public office as state Senator, he served as chairman of the Nevada Republican Party until May 2011, when he stepped down in order to pursue the Republican nomination for Congress. Amodei was the Republican candidate for the special election held on September 13, 2011, to replace Dean Heller in Nevada's second congressional district.

Tweets by https://twitter.com/MarkAmodeiNV2
Subscribe
Please login to comment
0 Comments
Inline Feedbacks
View all comments
wpDiscuz
0
0
Would love your thoughts, please comment.x
()
x
| Reply
You are going to send email to