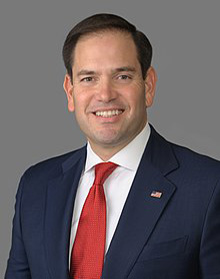 Marco Antonio Rubio (born May 28, 1971) is an American politician, attorney, and the junior United States Senator for the State of Florida. A member of the Republican Party, Rubio previously served as Speaker of the Florida House of Representatives. Rubio unsuccessfully sought the Republican nomination for President of the United States in 2016, winning presidential primaries in the State of Minnesota, the District of Columbia, and the Commonwealth of Puerto Rico.

Tweets by https://twitter.com/marcorubio
Subscribe
Please login to comment
0 Comments
Inline Feedbacks
View all comments
wpDiscuz
0
0
Would love your thoughts, please comment.x
()
x
| Reply
You are going to send email to