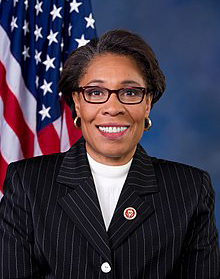 Marcia Louise Fudge (born October 29, 1952) is the U.S. Representative for Ohio's 11th congressional district, serving since 2008. She is a member of the Democratic Party. The district includes most of the black-majority areas between Cleveland and Akron. Fudge was Chairwoman of the Congressional Black Caucus in the 113th Congress. Fudge was chosen to replace Debbie Wasserman Schultz as chair of the 2016 Democratic National Convention after a leak of internal documents released by WikiLeaks.

Tweets by https://twitter.com/repmarciafudge
Subscribe
Please login to comment
0 Comments
Inline Feedbacks
View all comments
wpDiscuz
0
0
Would love your thoughts, please comment.x
()
x
| Reply
You are going to send email to