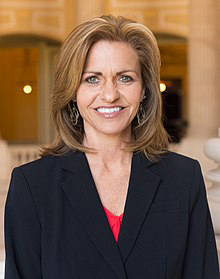 Lynn Haag Jenkins (born June 10, 1963) is an American politician and member of the Republican Party who serves as the U.S. Representative for Kansas's 2nd congressional district, in office since 2009. As of the 114th Congress, she is the senior member of Kansas's House delegation and the Vice Chair of the House Republican Conference. She previously served as Kansas State Treasurer from 2003 to 2008, in the Kansas House of Representatives from 1999 to 2000 and the Kansas Senate from 2000 to 2002. She is a founder of Maggie's List, a political action committee designed to increase the number of conservative women elected to federal public office. She is also a member of the Republican Main Street Partnership which is a coalition of centrist Republicans. Jenkins announced in January 2017 that she would not be running for re-election in 2018 and her current term in the House would be her last.

Representing the 2nd in KS with pride!