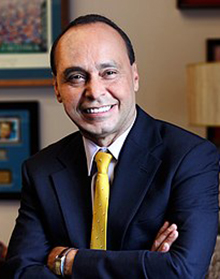 Luis Vicente Gutiérrez (born December 10, 1953) is an American politician serving as the U.S. Representative for Illinois's 4th congressional district since 1993. From 1986 until his election to Congress, he served as a member of the Chicago City Council representing the 26th ward. He is a member of the Democratic Party and the Congressional Progressive Caucus. In the 113th Congress, with his 20 years of service, Gutiérrez became, along with Bobby Rush, the longest serving member of the Illinois House delegation, and so is occasionally referred to as the unofficial "dean" of the delegation.