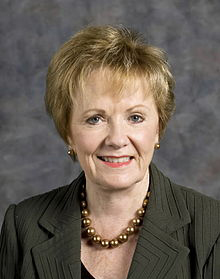 Norvell Kay Granger (née Mullendore; born January 18, 1943) is an American Republican politician from the U.S. state of Texas, representing its 12th congressional district in the U.S. House of Representatives. A former teacher and businesswoman, she is the first Republican woman to represent Texas in the U.S. House. After serving on the zoning commission of Fort Worth, Texas, in 1991 she was elected as the city's first woman mayor, serving two terms to 1995. In 2016, Granger made headlines by joining a long list of Republicans who opposed the GOP nominee for President, Donald Trump.

Tweets by https://twitter.com/RepKayGranger
Subscribe
Please login to comment
0 Comments
Inline Feedbacks
View all comments
wpDiscuz
0
0
Would love your thoughts, please comment.x
()
x
| Reply
You are going to send email to