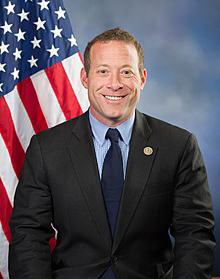 Joshua S. Gottheimer (born March 8, 1975) is an American lawyer, writer, public policy adviser, and the U.S. Representative for New Jersey's 5th congressional district. He has been active in the Democratic Party as a speechwriter for Bill Clinton and as an adviser to the presidential campaigns of Wesley Clark, John Kerry, and Hillary Clinton. He has also worked for Burson-Marsteller, the Federal Communications Commission, Ford Motor Company, and Microsoft. On November 8, 2016, he defeated incumbent Scott Garrett in the congressional race for New Jersey's 5th District.