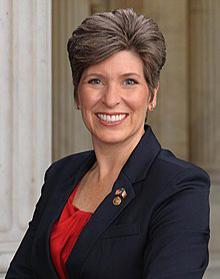 Joni Kay Ernst (née Culver, July 1, 1970) is an American combat veteran and politician serving as the junior United States Senator for Iowa since 2015. A Republican, she served in the Iowa Senate from 2011 to 2014. She served in the Iowa Army National Guard from 1993 to 2015, retiring as a lieutenant colonel. Ernst is the first woman to represent Iowa in the United States Congress and the first female combat veteran elected to the United States Senate from any state.