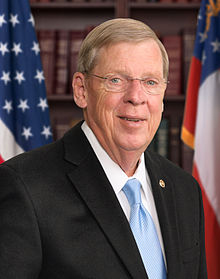 Born in Atlanta, Georgia, Isakson served in the Georgia Air National Guard (1966–1972) and graduated from the University of Georgia. He opened a real estate branch for Northside Realty and later served 22 years as the company's president. After a failed bid for the Georgia House of Representatives in 1974, he was elected in 1976. He served seven terms, including four as minority leader. Isakson was the Republican candidate for governor of Georgia in 1990, but lost. Two years later, he was elected to the Georgia Senate and served one term. He unsuccessfully ran in the Republican primary in the 1996 U.S. Senate elections.