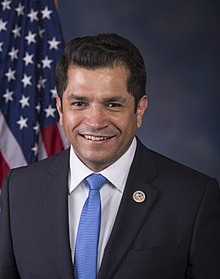 Jimmy Gomez (born November 25, 1974) is an American politician serving as the U.S. Representative for California's 34th congressional district since 2017. A member of the Democratic Party, he previously served in the California State Assembly from 2012 to 2017. On June 6, 2017, he won a special election to replace Xavier Becerra in Congress, after Becerra resigned to become Attorney General of California. On July 11, 2017, Gomez was officially sworn in.

Tweets by https://twitter.com/RepJimmyGomez
Subscribe
Please login to comment
0 Comments
Inline Feedbacks
View all comments
wpDiscuz
0
0
Would love your thoughts, please comment.x
()
x
| Reply
You are going to send email to