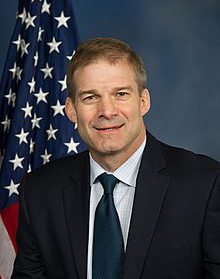 James Daniel Jordan (born February 17, 1964) is the U.S. Representative for Ohio's 4th congressional district, serving since 2007. He is a member of the Republican Party, and a founding member of the Freedom Caucus, the farthest-right grouping within the House Republican Conference. The district is located in the north-central and western portions of the state and includes Lima, Tiffin, and Elyria.

In 2018, he announced that he was running for the House Speaker position that will be vacant upon Paul Ryan's retirement in January 2019.

Tweets by https://twitter.com/Jim_Jordan
Subscribe
Please login to comment
0 Comments
Inline Feedbacks
View all comments
wpDiscuz
0
0
Would love your thoughts, please comment.x
()
x
| Reply
You are going to send email to