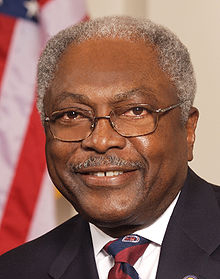 James Enos Clyburn (/ˈklaɪˌbɜːrn/; born July 21, 1940) is an American politician of the Democratic Party serving as the U.S. Representative for South Carolina's 6th congressional district since 1993, and the House Assistant Minority Leader since 2011.[1] He was previously House Majority Whip, serving in that post from 2007 to 2011. His congressional district includes large portions of Columbia and Charleston, as well as several rural areas between them. Clyburn is the current dean of the South Carolina congressional delegation.