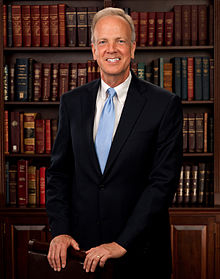 Raised in Plainville, Kansas, Moran graduated from the University of Kansas and the University of Kansas School of Law. He worked in private law and served as the state special assistant attorney general (1982–85) and deputy attorney of Rooks County (1987–95). He served in the Kansas Senate (1989–1997), and was majority leader for his last two years. He was elected to the House of Representatives in 1996 and served six terms with little electoral opposition. He was elected to the U.S. Senate in 2010 after defeating fellow U.S. Representative Todd Tiahrt in a contentious primary. He was re-elected to the U.S. Senate in 2016.