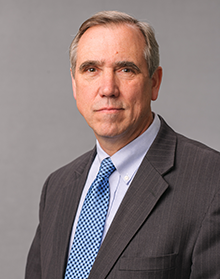 Jeffrey Alan Merkley (born October 24, 1956) is an American politician serving as the junior United States Senator from Oregon since 2009. He is a member of the Democratic Party. Prior to his election to the Senate, Merkley was a five-term member of the Oregon House of Representatives representing the state's 47th district, located in eastern Multnomah County within the city limits of Portland. From 2007 to 2009, he served as Speaker of the Oregon House of Representatives.

Tweets by https://twitter.com/SenJeffMerkley
Subscribe
Please login to comment
0 Comments
Inline Feedbacks
View all comments
wpDiscuz
0
0
Would love your thoughts, please comment.x
()
x
| Reply
You are going to send email to