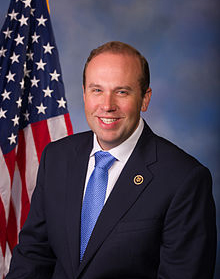 Jason Thomas Smith (born June 16, 1980) is an American businessman, politician, and the U.S. Representative for Missouri's 8th congressional district after winning a special election on June 4, 2013. The district comprises 30 counties, covering just under 20,000 square miles of southeastern and southern Missouri. He is the third-youngest Republican member of the U.S. House of Representatives, behind only Elise Stefanik of New York and Michael Gallagher of Wisconsin.