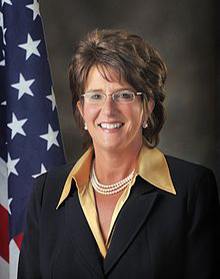 Born in South Bend, Indiana on August 13, 1963, Walorski grew up with her two older brothers in the city's Gilmer Park neighborhood. Her mother, Martha C. (née Martin), worked as a meat cutter at a local grocery store, and her father, Raymond B. Walorski, worked as a firefighter and owned an appliance store. She has Polish and German ancestry. As a child, she attended Hay Elementary School and graduated from Riley High School in 1981. She then attended Liberty Baptist College from 1981–83, and graduated from Taylor University, receiving her B.A. in Communications and Public Administration in 1985.