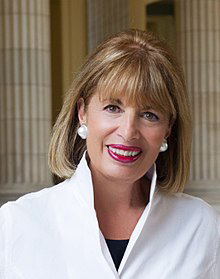 Karen Lorraine Jacqueline Speier(born May 14, 1950) is an American politician who currently serves as U.S. Representative for California's 14th congressional district, serving in Congress since 2008. She is a member of the Democratic Party. The district, numbered as the 12th District from 2008 to 2013, includes the northern two-thirds of San Mateo County and the southwest quarter of San Francisco. She represents much of the territory that had been represented by her political mentor, Leo Ryan.