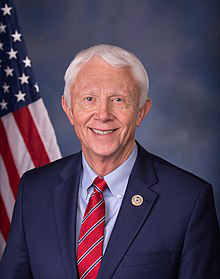 John W. Bergman (born February 2, 1947) is a retired United States Marine Corps lieutenant general and the U.S. Representative for Michigan's 1st congressional district. He served as commanding general of Marine Forces Reserve and Marine Forces North. He also served as a naval aviator, flying rotary-winged aircraft such as the CH-46 and UH-1, as well as fixed-wing aircraft such as the T-28 and KC-130. A Republican, he was elected to the U.S. House in the 2016 election. Bergman is the highest-ranking military official ever elected to the United States Congress.

Tweets by https://twitter.com/RepJackBergman
Subscribe
Please login to comment
0 Comments
Inline Feedbacks
View all comments
wpDiscuz
0
0
Would love your thoughts, please comment.x
()
x
| Reply
You are going to send email to