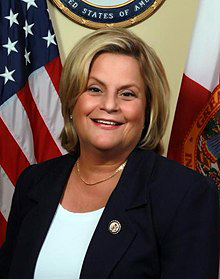 Ileana Ros-Lehtinen (born Ileana Carmen Ros y Adato, July 15, 1952) is the most senior U.S. Representative from Florida, representing Florida's 27th congressional district. She was Chairwoman of the House Foreign Affairs Committee from 2011–2013. In 1989, Ros-Lehtinen won a special election and became the first Cuban American and Latina elected to Congress. She was also the first Republican woman elected to the House from Florida, and is currently the most senior Republican woman in the U.S. House and in Congress. Ros-Lehtinen gave the first Republican response to the State of the Union address in Spanish in 2011, and gave the third in 2014.