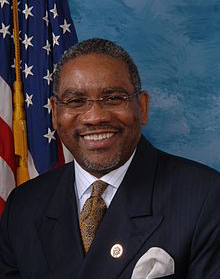 Gregory Weldon Meeks (born September 25, 1953) is the U.S. Representative for New York's 5th congressional district, formerly in the 6th District since 1998. He is a member of the Democratic Party. The district formerly included, in the last congress, most of southeastern Queens, including Jamaica, Laurelton, Rosedale, Cambria Heights, Saint Albans, Springfield Gardens, Far Rockaway, and the John F. Kennedy International Airport. His district is made up mainly of middle and upper middle-class African-American and West Indian American communities, but also included a small part of Ozone Park and part of Howard Beach known as Old Howard Beach, both of which are predominantly middle-class Italian-American communities. In addition, he represented much of Kew Gardens and northern Richmond Hill.