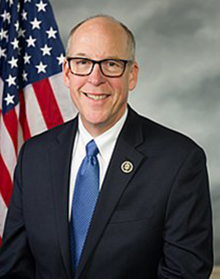 Gregory Paul Walden (born January 10, 1957) is an American politician, the U.S. Representative for Oregon's 2nd congressional district, first elected to that office in 1998. He is a member of the Republican Party, and as of 2017 the only Republican member of the congressional delegation from Oregon. The 2nd district covers more than two-thirds of the state (generally, east of the Cascades). He is the son of Paul E. Walden, three-term Oregon state representative.