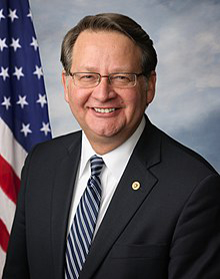 Gary Charles Peters Sr. (born December 1, 1958) is an American politician and businessman serving as the junior United States Senator from Michigan since 2015. A member of the Democratic Party, he was the U.S. Representative for Michigan's 14th congressional district from 2013 until his election to the Senate. The district includes the eastern half of Detroit, as well as the Grosse Pointes, Hamtramck, Southfield and Pontiac. He previously represented Michigan's 9th congressional district from 2009 to 2013. Following the redrawing of congressional district boundaries after the 2010 United States Census, Peters defeated fellow Congressman Hansen Clarke in the Democratic primary and won reelection in the newly redrawn 14th District.