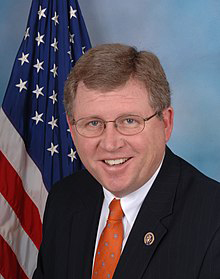 Frank Dean Lucas (born January 6, 1960) is an American politician. Lucas is the U.S. Representative for Oklahoma's 3rd congressional district, serving since 2003, having previously represented the 6th district, from 1994 to 2003. He is a member of the Republican Party and chairs the House Committee on Agriculture. His district, numbered as the 6th district from 1994 to 2003, is the largest congressional district in the state and one of the largest in the nation that does not cover an entire state. It covers 34,088.49 square miles and stretches from the Panhandle to the fringes of the Tulsa suburbs—almost half of the state's land mass.

Tweets by https://twitter.com/RepFrankLucas
Subscribe
Please login to comment
0 Comments
Inline Feedbacks
View all comments
wpDiscuz
0
0
Would love your thoughts, please comment.x
()
x
| Reply
You are going to send email to