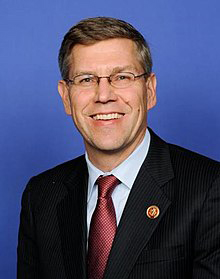 Erik Philip Paulsen (born May 14, 1965) is an American politician serving in the United States House of Representatives for Minnesota's 3rd congressional district since 2009. A member of the Republican Party of Minnesota, he previously served in the Minnesota House of Representatives from 1995 to 2009 and as Majority Leader from 2003 to 2007. His district in the western part of the Twin Cities metropolitan area includes Bloomington, Eden Prairie, Edina, Minnetonka, Maple Grove, Plymouth and Wayzata.