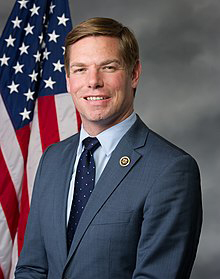 Eric Michael Swalwell Jr. (born November 16, 1980) is an American politician from California, who serves as the U.S. Representative from California's 15th congressional district. He is a member of the Democratic Party. His district covers most of eastern Alameda County and part of central Contra Costa County, including San Ramon, Castro Valley, Hayward, Pleasanton, Livermore, Fremont, Sunol, Union City, and his hometown of Dublin. He was elected in November 2012, defeating incumbent Pete Stark, a fellow Democrat almost a half-century Swalwell's senior, who had held the office since 1973. Swalwell took office on January 3, 2013.