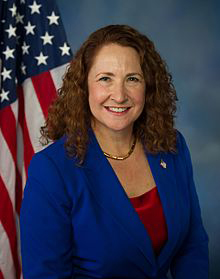 Elizabeth Esty (née Henderson; born August 25, 1959) is the U.S. Representative from Connecticut's 5th congressional district, elected in 2012. She is a Democrat. Previously she was a member of the Connecticut House of Representatives, representing the 103rd Assembly District, which consisted of Cheshire and parts of Hamden and Wallingford. She also served two terms on the Cheshire Town Council. The 5th congressional district spans central and northwest Connecticut, including Waterbury, Danbury, New Britain, Meriden, Torrington, Litchfield County, the Farmington Valley, Newtown, and Esty's hometown of Cheshire.