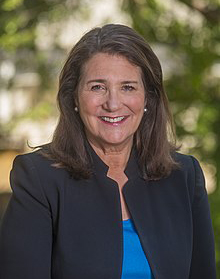 A fourth-generation Coloradan, DeGette was born in Tachikawa, Japan, the daughter of Patricia Anne (née Rose) and Richard Louis DeGette. Her parents were American, and, at the time of her birth, her father was serving in the armed forces. She graduated from Colorado College where she earned a B.A. in political science, and was elected to the Pi Gamma Mu international honor society in 1979. She earned a Juris Doctor degree from New York University School of Law in 1982. She then returned to Denver and began a law practice focusing on civil rights and employment litigation.