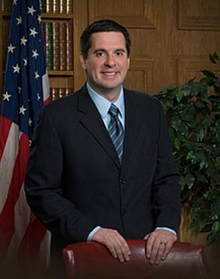 Devin Gerald Nunes (born October 1, 1973) is an American politician serving as the U.S. Representative for California's 22nd congressional district since 2003. A Republican, he serves as chairman of the United States House Permanent Select Committee on Intelligence and was a member of President Trump's transition team. Nunes's district, numbered as the 21st from 2003 to 2013, is in the San Joaquin Valley and includes most of western Tulare County and much of eastern Fresno County.

“If we lose the House, all of this ends. All of this is over.” -Devin Nunes