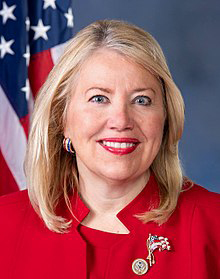 Debbie Lesko (born November 14, 1958) is an American politician and a Republican member of the United States House of Representatives, representing Arizona's 8th congressional district. She previously served as a member of the Arizona Senate from 2015 to 2018, representing the state's 21st district. She also was President pro tempore of the Arizona Senate from 2017 to 2018. Lesko also served as a member of Arizona House of Representatives from 2009 until 2015.