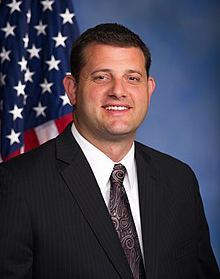 David Goncalves Valadao (born April 14, 1977) is an American politician who has been a member of the United States House of Representatives, representing California's 21st congressional district, since 2013. Prior to that, he served one term in the California State Assembly, representing the 30th district. He is a member of the Republican Party. Fluent in both Portuguese and Spanish, Valadao is one of five House Republicans who represent a Hispanic-majority district and has gained a reputation as one of the Republican Party's leading advocates of comprehensive immigration reform.

Tweets by https://twitter.com/RepDavidValadao
Subscribe
Please login to comment
0 Comments
Inline Feedbacks
View all comments
wpDiscuz
0
0
Would love your thoughts, please comment.x
()
x
| Reply
You are going to send email to