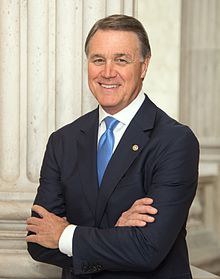 David Alfred Perdue Jr. (born December 10, 1949) is an American businessman and politician. He is the junior United States Senator from Georgia, having been elected in 2014 to the seat previously held by Saxby Chambliss, who retired. Perdue won the Republican primary and defeated Democratic nominee Michelle Nunn on November 4, 2014, taking office on January 3, 2015. He is a first cousin of Sonny Perdue, former Governor of Georgia and current Secretary of Agriculture.