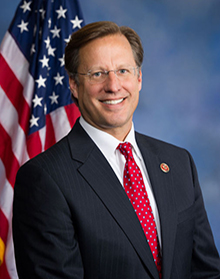 David Alan Brat (born July 27, 1964) is an American economist and politician serving as the U.S. Representative for Virginia's 7th congressional district since 2014. Prior to his election to Congress, Brat was a professor at Randolph–Macon College. Brat defeated House Majority Leader Eric Cantor in the district's 2014 Republican primary on June 10, 2014. Brat's primary victory over Cantor made him the first primary challenger to oust a sitting House Majority Leader since the position's creation in 1899, and is considered one of the biggest upsets in congressional history. He defeated Democratic nominee Jack Trammell on November 4, 2014.

Tweets by https://twitter.com/RepDaveBrat
Subscribe
Please login to comment
0 Comments
Inline Feedbacks
View all comments
wpDiscuz
0
0
Would love your thoughts, please comment.x
()
x
| Reply
You are going to send email to