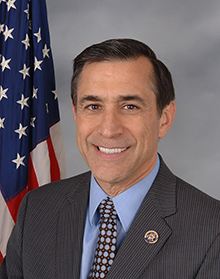 Darrell Edward Issa (born November 1, 1953) is the Republican U.S. Representative for California's 49th congressional district, serving in Congress since 2001. His district presently covers the northern coastal areas of San Diego County, including cities such as Oceanside, Vista, Carlsbad, and Encinitas, as well as a small portion of southern Orange County. From January 2011 to January 2015, he served as Chairman of the House Oversight and Government Reform Committee.