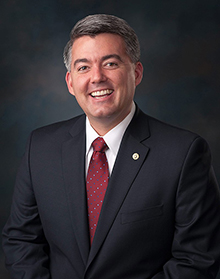 Cory Scott Gardner (born August 22, 1974) is an American politician serving as the junior United States Senator from Colorado since 2015. A Republican, he was previously the U.S. Representative for Colorado's 4th congressional district from 2011 to 2015 and a member of the Colorado House of Representatives from 2005 to 2011.

Gardner announced his candidacy for the U.S. Senate in March 2014, quickly clearing the Republican primary field, and defeated Democratic incumbent Mark Udall in the November 2014 race. Since 2017, Gardner has been chairman of the National Republican Senatorial Committee, ranking him sixth in the Senate Republican leadership.