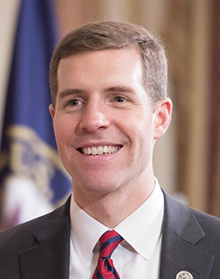 Conor James Lamb (born June 27, 1984) is an American attorney, politician, former federal prosecutor and former Marine serving as the U.S. Representative for Pennsylvania's 18th congressional district since 2018. A member of the Democratic Party, he won a special election that attracted national attention, held on March 13, 2018 in which he defeated Republican Rick Saccone by 755 votes. After Pennsylvania's congressional map was redrawn by court order, Lamb filed to run for a full term in the neighboring 17th congressional district in the 2018 general election. Lamb was a federal prosecutor in the U.S. Attorney's office in Pittsburgh, where he led prosecutions of cases involving opioid-related deaths, violent crimes, and gun trafficking.