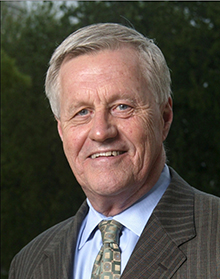 Collin Clark Peterson (born June 29, 1944) is an American politician, member of the Minnesota Democratic–Farmer–Labor Party, the U.S. Representative for Minnesota's 7th congressional district, and the most senior representative from Minnesota, serving since 1991. He is the ranking member of the House Committee on Agriculture and the dean of the Minnesota congressional delegation. A conservative Democrat, his district, Minnesota's largest and most rural district, includes most of the western area of the state, including Moorhead, Fergus Falls, Bemidji, Detroit Lakes, Thief River Falls, Willmar, Marshall, and Alexandria.

Tweets by https://twitter.com/collinpeterson
Subscribe
Please login to comment
0 Comments
Inline Feedbacks
View all comments
wpDiscuz
0
0
Would love your thoughts, please comment.x
()
x
| Reply
You are going to send email to